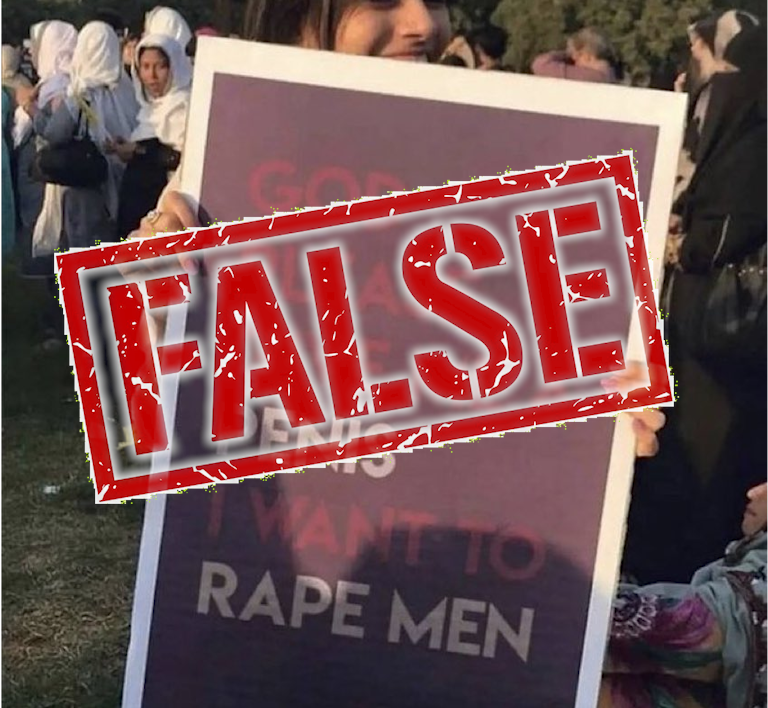 Claim: A placard raised at Aurat March 2022 “God Please Give Me a Penis I Want To Rape Men”

Fact: A poster raised at Aurat March 2018 was edited with the doctored text. The original text of the placard was “Girls Just Wanna Have FUNdamental Rights”

Every year after the Aurat March is held on 8th March, the International Women’s Day, several social media users take to Twitter, Facebook and Instagram to post misinformation regarding the march, its organizers and participants in an attempt to incite hatred and vitriol against the people who are affiliated with the movement.

On 8 March 2022, an image claiming to be from this year’s march went viral on social media. This image showed a woman holding a poster which read “God Please Give Me a Penis I Want To Rape Men”. Through Reverse Image Search we discovered that this image was originally posted in a blog in 2018 with different words on the poster.

For further confirmation, we ran the image through Forensically’s Noise Analysis feature, which is available online free of cost. This feature allows you to highlight the specific areas in the image which have a digital residue of some sort of editing. The original image shows a girl holding a poster that reads “Girls Just Wanna Have FUNdamental Rights”. This image was first posted online in April 2018 in a blog post called Pakiholic.

This further proves that the image was doctored to imply that participants of Aurat March endorse sexual violence against men in Pakistan. The Aurat March manifesto demands women’s right to equal treatment at home, at the workplace, in institutions of the government, in front of the judiciary. This is a movement that faces hatred motivated by religious leaders every year.

Ammodump is not owned by Maurine Waqar or Khurram Ahmad