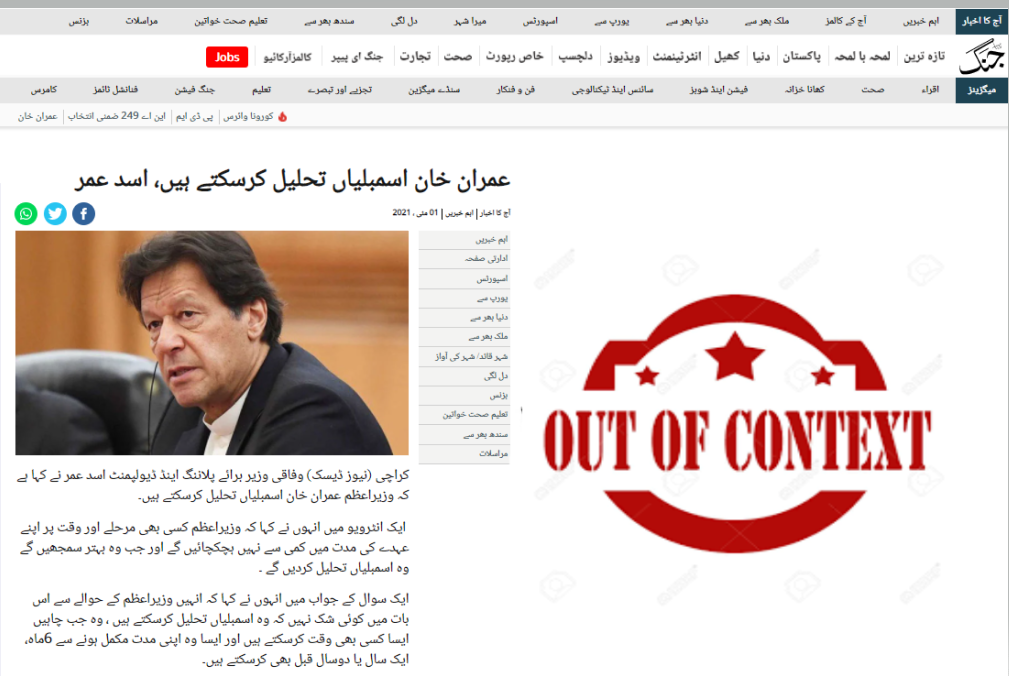 PM Khan did not threaten to dissolve the assemblies

Fact: Asad Umar quotes the PM Khan saying that if he is blackmailed by the Opposition he would not hesitate in dissolving the assemblies.

On 1 May 2021 one of Pakistan’s leading print news media outlets, Jang Group published a misleading article online titled “Imran Khan assembliyan tehleel kar sakte hain (Asad Umar)” [translated[ “Imran Khan can dissolve assemblies (Asad Umar)”. The article further narrates that Federal Minister Planning and Development Asad Umar has claimed that there is no doubt that Prime Minister Imran Khan would note hesitate to dissolve the assemblies at any point without any care for his personal tenure.

This is just one of many different gallery layouts you can use!

Basic Fact Check found this to be misleading.

The article repeats the same phrase in different variations which is vague and misleading because the reader might be easily convinced that PM Imran Khan has expressed such a desire himself or that this is an imminent political reality of Pakistan as perceived by him .

Asad Umar was interviewed by journalist Rana Mubashir on Aaj News. The complete video of this interview can be found here on Youtube. Answering his question on whether the PM will dissolve the assemblies if Opposition raises the public against the current government, Umar elaborated that Khan is a strong-willed man who would be willing to give up power if he is unable to make change. While quoting Khan he claims that he said to other politicians in a private meeting that if anyone tried to blackmail him, he will not stand it and just dissolve the government.

Now this clearly portrays that Umar was trying to drive a point home which is to say that Imran Khan can not be “blackmailed” by other politicians into straying away from his agenda of bringing change. Jang Magazine’s decision to not include the full comment takes the statement out of context and misleads the audience into believing something that the Prime Minister did not imply.

Verdict: OUT OF CONTEXT – An excerpt of the statement made by Asad Umar has been taken out of context to imply the presence of an imminent threat that Prime Minister Imran Khan may dissolve the assemblies. However, Asad Umar said this in the context of when and if Opposition blackmails Khan into straying from his goal to bring change to Pakistan.

An excerpt of the statement made by Asad Umar has been taken out of context to imply the presence of an imminent threat that Prime Minister Imran Khan may dissolve the assemblies. However, Asad Umar said this in the context of when and if Opposition blackmails Khan into straying from his goal to bring change to Pakistan.

Tableeghi Jamaat was not attacked in Winder, Balochistan.