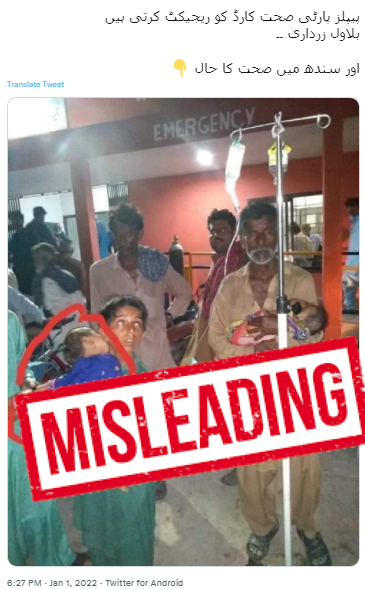 Claim: A tweet criticising the rejection of Sehat Card policy in Sindh shared an image of a child receiving a IV drip in a hospital courtyard, purportedly to highlight the poor condition of healthcare in Sindh

Fact: The image is from 2019 and predates the introduction of the Sehat card policy. Using a 4 year old image to criticise the current state of healthcare in the province and recent decisions by the provincial government is misleading.

Sehat health cards represent an insurance based healthcare policy where citizens are distributed health insurance cards through which they can access insurance coverage at private hospitals. Prime Minister Imran Khan launched the Sehat Health Card in the entire Khyber Pakhtunkhwa province in December 2020. On 13 December 2021 the policy was pre-launched in Punjab, the country’s most populous province.

On 1 January 2022 twitter user Hasan Khan posted a tweet criticising the Sindh government’s decision. Attached to the tweet was an image of a child receiving an IV drip in a hospital’s courtyard captioned “meanwhile the state of healthcare in Sindh”. We decided to fact check the image because details of when and where the image was taken were not provided by the author.

Through a reverse image search, Basic Fact Check discovered the image is more than 3 and a half years old. The earliest instance of the image being posted online is dated 1 June 2019. The author of the tweet shared the image to criticise a recent decision by the provincial government in Sindh to reject the health card policy developed by the federal government. The context in which the image is shared and its caption “the state of healthcare in Sindh” implies it depicts the current state of healthcare in the province. Hence, the tweet is misleading.

Since the image hasn’t been appended with details where it was taken, it isn’t possible to verify whether it was taken in Sindh. Through a reverse image search, Basic Fact Check found it has also been shared by Indian news media purportedly to depict scenes from Bihar province in India. Therefore, it is misleading to claim the image is from Sindh without additional proof.

By Areeba Fatima | 06 January 2022 | 07:32 PM Claim: A tweet criticising the rejection of Sehat Card policy in Sindh shared an image…