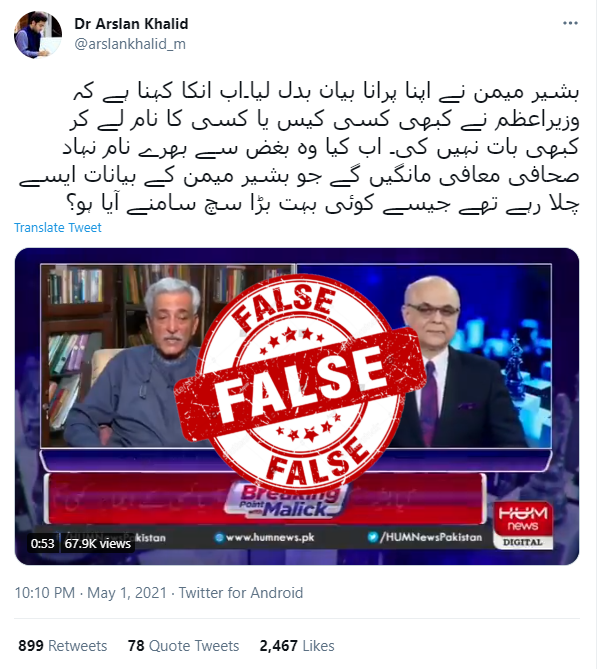 Former Director General of Federal Investigation Agency (FIA) Bashir Memon, made claims in an interview given to journalist Shahid Aslam for Urdu Fact Focus on 27th April 2021. He claimed that the top government functionaries including PM Imran Khan wanted FIA to register a case against Supreme Court Judge Qazi Faez Isa. These claims led to a widespread debate on mainstream media and almost all accused by former DG FIA had to deny the claims.

On 1st May 2021, the video clip of former DG FIA Bashir Ahmed Memon’s interview with a TV journalist in which he categorically denies ever being in a conversation with Imran Khan where he talked about any specific case or mentioned someone’s name directly.

In this tweet by Dr Arsalan Khalid on 1st May 2021, he implied that Memon had taken his statement back.
“[translation] Bashir Memon has changed his statement again. Now he is saying that the Prime Minister never talked about any specific case or never took someone’s name. Now what about those one of a kind, malicious journalists who were broadcasting his statement as if it is the ultimate truth”

Memon’s interview on HUM News Digital that aired on 1st May 2021. In the complete video of this interview it is clear that Bashir Memon repeated the same statement that he did in this video interview on 27th April 2021. An honest paraphrase of his statement is that he received the phone call from the PM Office and reached the office to meet Imran Khan. He also recalls PTI core committee member, Shahzad Akbar. He recalls a brief and vague conversation with the PM, where he asked him to gather courage in preparation of a case and this conversation lasted barely two to three minutes. After which they went to Shahzad Akbar’s office where Memon asked him which case Khan was referring to and this is the moment where Shahzad Akbar informed him that this is the case regarding Justice Qazi Faez Isa and his wife.

In an interview by journalist Shahid Aslam, published online on 27th April 2021, Bashir Memon explained the details of this statement. In his interview with journalist Shahzeb Khanzada on GEO News, published online on 28th April 2021, Memon again repeated the same clarification that PM Imran Khan never directly mentioned Justice Qazi Faez Isa’s name but Shahzad Akbar was the first person to inform him that this is the same case Khan was talking about.

Summary: Former DG FIA Bashir Memon did not take his statement back. In fact it has been consistently the same and he never claimed that PM Imran Khan took Justice Qazi Faez Isa’s name directly with regards to preparing a case against the Justice. Basic Fact Check found Arsalan Khalid’s tweet about Bashir Memon taking back his statement.

Former DG FIA Bashir Memon did not take his statement back. In fact it has been consistently the same and he never claimed that PM Imran Khan took Justice Qazi Faez Isa’s name directly with regards to preparing a case against the Justice. Basic Fact Check found Arsalan Khalid’s tweet about Bashir Memon taking back his statement.

PM Khan did not threaten to dissolve the assemblies